It’s time to do some Evernote configuration.

To write an application that needs connection with Evernote I need a developer account. I have one, so in fact, you need it 😉

Go to https://dev.evernote.com/doc/ and click “Get an API key” button and fill the form with your data. You’ll get Consumer Key and Consumer Secret needed to connect with Evernote.

Now I suggest you create a test account in https://sandbox.evernote.com/. It allows you to test your application using test account so you won’t mess up your real notes.

The best way to install the SDK is to use Composer. Go in your console to code directory of the project and type composer require evernote/evernote-cloud-sdk-php dev-master. Let’s stop here for a moment and see what it does.

– composer simply executes Composer script.
– require tells, that you want to install the library
– evernote/evernote-cloud-sdk-php tells what library you need
– dev-master says what version you want

This command will do all the work, so when it ends the SDK will be ready to use!

But there is a problem… It won’t work…

[update] It’s now outdated, see the explanation in the end of this post.

Evernote SDK has one error – start_session() method is called twice. The second call, of course, throws an error. There is a pull request on GitHub with a fix, but it’s waiting for merge.

Thankfully, Composer can deal with such situations. All I had to do was fork the original repository on GitHub, fix the code and tell composer to use my repository instead of original one.

So in composer.json I had to add something like this:

Now, execute composer update and all will be installed correctly using my fix.

It’s a good practice to store any parameters needed for connecting with external services in app/config/parameters.yml file. Let’s add previously received consumer key and secret in there:

Parameters stored there can be used by injection to services (I’ll cover it in the future) or by calling $this->getParameter("parameter_name") in a controller.

Finally, the configuration is done so I can connect to the test account. Let’s create a new controller for dealing with Evernote. I’ll need one action for connecting with Evernote using consumer key and secret and receiving token for further communication.

The code is simple. Create Client, authorize in Evernote and receive the token. The only line that requires an explanation is the last one: return new Response();. It’s an empty response required by Symfony and the real redirect to Evernote is done inside authorize action using header function.

After authorizing your application you’ll receive the token which, for now, we’ll store in the user session. After that, you’ll be redirected to the list of notes controller, described in the previous post.

Here comes the best. Getting the notes, the real notes, from Evernote.

Let’s start with the code.

First I create Client object using received in connectAction token. Then I need to specify a filter for notes and it’ll be enough to order them by creation date.
Next, I need to specify what kind of data I want to receive. I set includeTitle to receive the title.
Now I can call $client->getUserNotestore()->findNotesMetadata to get notes’ data. This function gets only basic data like guid, title, creation date, etc. Content will be unavailable, so let’s skip it for a moment.
Let’s skip also reminder date because it requires some more actions to receive it and I’ll cover it in the next post.

Note: Because in Evernote id is stored as guid which is a string I’ve changed the type of id field in Note model from integer to string.

The final step is to create an array of Note models and return them just like dummy notes was returned earlier.

If everything goes ok you shall see something like this (I have the notes in Polish, you’ll probably have some in your language 😉 ) 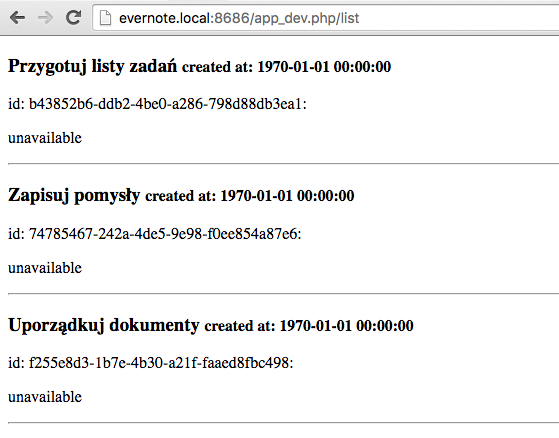 And that’s basically it. Seeing real notes instead of dummy ones in nice, isn’t it? 🙂

You can find all the code presented in this post here.

You can now skip the whole section Dealing with broken libraries, it’ll be enough to install the SDK like it’s described in Installing SDK section.
All changes are available, as always, in the GitHub.