As you may know, in PHP you can use single and double quotes for strings. These two lines are equal:

The only difference here is handling variables placed inside quotes. Let’s look at this simple example:

As you can see in double quotes variables are processed and in single quotes they aren’t.
But which one should I use?

Single quotes must be faster, right?

But some time ago I’ve read somewhere (maybe on facebook?) that double quotes are faster because they are improved all the time, and single quotes are just like they were from the beginning. It sounded reasonable to me, so I just started to use double quotes everywhere.

But one day my coworker asked me why are you using double quotes? and I can’t give him any reasonable answer! Because I don’t check it…

Let’s check it out!

So, today I want to check it and end this topic once and for all. I’ve written the simple script, measure time using microtime(true); function and checking the performance of single and double quotes.

And the results are clear: 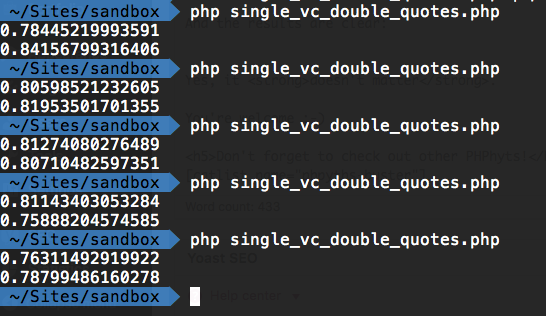