Ok, we have installed environment, everything works fine so we can start creating our app!

As you may remember I want to write simple application extending Evernote by simplify displaying reminders and do some daily action on some specific notes.

I’ll start with displaying the notes. By now I don’t need connection with Evernote itself, so I’ll create some dummy notes in PHP.

Let’s start with the model for note. Model is the special type of PHP class which describes all data for the note. I need for sure: id, title, description, remind at date and maybe created at date. It is enough for now if the application will require some more information I’ll add it to the model.

That’s all. To use this model I’ll create a new object of Note class, set its values and then pass it to the view.

Note: The note model is placed in Entity directory. It’s a standard directory where Doctrine models are stored. I won’t use Doctrine right now, so trust me and make it so 😉

I have a class for storing notes, but I need something to really use it. This “something” is a controller. A controller is a special (yeah, every class is special 😜) type of class that receives a request from the browser, does something, e.g. gets notes data, and return the response.

For now, I need a controller that create some notes and return them to the view so I could display a list.

Controllers are usually placed in Controller directory and have names ending with Controller.

Every controller has actions, that is methods that really do the work. Every action has to end with Action. So, I need a controller, let’s say NoteController and an action, let’s say listAction.

Note: I’ll extend Controller class for each controller – it contains helpers and the most often used methods. It’s standard Symfony class, so you’ll see it very often in Symfony apps 🙂

I have the NoteController scheme, so let’s focus on the notes. As I said before I’ll use some dummy note’s data, so I create a private method for generating them.

Now, let’s get those notes in listAction and pass them to the view.

Note: every action has to have the route – a special definition with route id and path for access in the browser. In this action, the route id is note_list (I like convention controller_action) and the path is simply /list (so it can be accessed by going to http://evernote.local:8686/app_dev.php/list URL).

To display the list I need some view. As you can see I’ve used :note:list.html.twig file in the action. It is a special notation for finding the proper view. :note means that the view should be placed in app/Resources/views/note directory, and list.html.twig is the view itself. Symfony uses template engine called Twig, so the file should end with the .twig extension. html in the name tells that the view is in HTML format – it can be set to json, XML, txt and so on.

The view will be very simple. It will use the notes received from the controller and display them in very simple way.

If you know some other template engine it should looks familiar to you. If not, let me explain it a little.

The first line, {% extends 'base.html.twig' %} tells Twig, that this view is using the base.html.twig template, placed in app/Resources/views directory, as a base one. base.html.twig template contains all basic markdowns, including <html>, <head>, <body>, styles and so on.
Because it extends another template it must use blocks from the parent. Block is a special construction which you can put in any place, e.g. <title> section, or in our example – <body> section.

The main block for the body is {% block body %} and I’m using it to display the notes.

Because notes are stored in an array they should be displayed using a loop. The most basic loop in Twig is {% for not in notes %} – it gets elements of the notes array one by one and stores each note data in note variable. I can then access every field of the note using ., for example for getting the title I use {{ note.title }}.

Note: There are two markups used in Twig – {% %} and {{ }}. The first one is used for doing things, like specify blocks, create loops and if statements. The second one is used for displaying data, like echo but in a simpler way.

Now, go to http://evernote.local:8686/app_dev.php/list URL in your browser. You should see something like this: 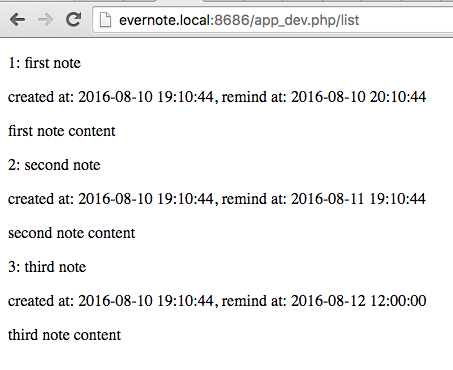 Huh, that was a long post, but it contains the basics of our application, so it has to be long.
We have now the model for storing notes, a controller for creating them and passing to the view, and view for displaying them as a list. It’s very good base for next steps.

You can find all the code on GitHub – I’m creating new branch for every post, so you can always check out how it looks in each stadium.

In the next post, I’ll describe Evernote SDK and show you how to get real notes from the Evernote 🙂